Well, I am trying to do more knitting, since that was something I did not do a whole lot of last year and I wanted to change that this year. 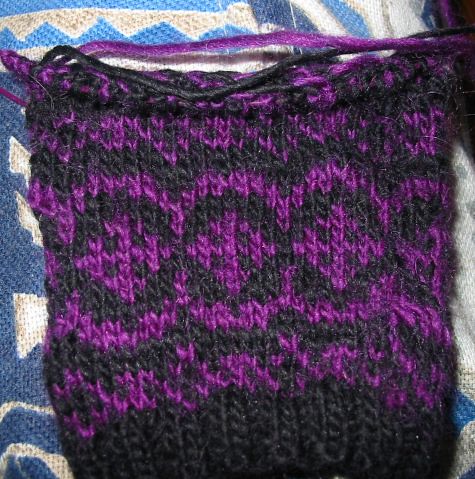 And then I frogged it. Because the color stitches were smaller than the black stitches, and I really wanted the color to pop more than that.

I had avoided a "yarn dominance" problem due to holding one yarn in each hand; I didn't want to deal with it so I was doing it the very slow way of dropping and picking up the yarn in the same hand for each color change.

I looked at the work to see why the colors were so dim. It looked like the black stitches were larger than the colorful stitches.

Turns out, it's a matter of yarn size: 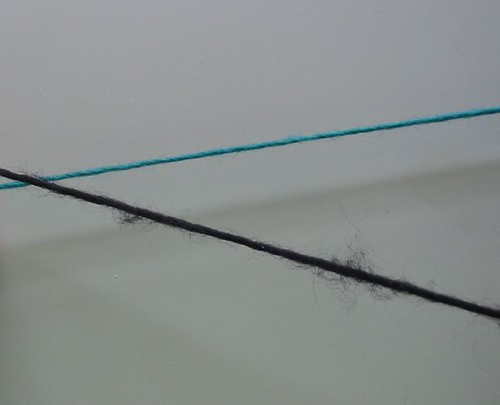 Look at that! Those yarns are made by the same company (Crystal Palace) and they are supposed to be the same weight/size of yarn! I'm disappointed in that lack of quality control.

One of the ladies in Knitting Group suggested I try holding one yarn in each hand and using the dominant hand for the colored yarn. That's probably the best way to go, though I kind of dread having to throw yarn with my right hand. I originally thought I would hold the colored yarn double, but when I wound up the two balls of that yarn (from the same dyelot) I found that the color progressions did not match. :(

I am a little disenchanted with this project, but I'm going to try again.

Today we conquered the room downstairs. I think we are completely done painting it now. It looks fantastic. We're letting it dry now and will check it again before pronouncing it "DONE done," but we both think it's finished.

I'm so happy! Now we'll be able to start moving stuff into that room and getting it all set up. I'm hoping we'll have room to put more bookshelves in there than we currently own, because we have too many books for the shelves we have.

I got more paint on my arms and clothes this time, but I didn't get any in my hair. I put all my hair up in a pony tail, clipped up my bangs, and covered the whole mess with a shower cap. I looked ridiculous, but my hair is not painty now.

I'm so pleased with the way this whole project went. We estimated our paint needs correctly, the rollers we got worked great on these walls, the paint went on smoothly, and the color still looks awesome.

Pie still doesn't like it. He crept in and watched us from the doorway a few times, but he ran out each time, obviously upset. When we were finished and came upstairs, he greeted us with some choice words about how he did not like the changes to his room and how we should really make it the way it used to be.

I think the cat likes reds and pinks. I just realized, while he was telling me all of this, that he was sitting on his favorite rug, which is a deep maroon. Maybe he really liked that nasty pink wall. I know cats don't see color as we know it, but I wonder if those hues are pleasant to him somehow.

Maybe I will get some bedspreads for that room that have some of that color in them. It would go okay with the new walls.
Collapse